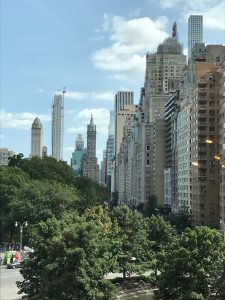 Just shy of two weeks ago, I not only attended my first Writer’s Digest conference in NYC, but I survived (!!!) my first Pitch Slam.

For anyone not familiar with a Pitch Slam, it’s like speed dating for writers. But instead of connecting with a cute guy or gal, your mission is to pique the interest of an agent or two (or more) who represents your chosen genre.

The rules are simple enough: You get a minute and a half to pitch your passion project, and he/she gets a minute and a half to respond. If the conversation goes the way you hope, the agent offers his/her business card and asks for a certain number of pages along with a reminder that we met at the NYC Writer’s Digest conference. And if the conversation doesn’t go so well? Well,  you still get professional feedback, so either way, I felt I couldn’t lose by giving it a shot.

After four months of sending query letters into Inboxes already brimming with submissions from hopeful writers like myself, the prospect of actually meeting agents face to face was very appealing. But what I wasn’t planning for, however, was how nervous I’d be.

Now if you don’t already know me, you have to understand that I’m not someone who’d be mistaken for an introvert. I love people and chatting up complete strangers is totally normal for me, so I assumed that chatting up these complete strangers wouldn’t be a problem either. But as many times as I paced around my hotel room and practiced the pitch that I’d written and re-written and committed to memory, nothing quite prepared me for when the doors opened to that conference room at 3:00 p.m. I felt like I’d forgotten everything I’ve ever known including my name, hometown, the title of my book, why I wrote it, why I was even in New York…

I’d done a little research about other people’s first Pitch Slams, and the first thing I noted was that you need to show up early. Not 10 or 15 minutes early, mind you. Like an hour early. Not wanting to make a rookie mistake, I made my way downstairs an hour early and quite a line had already formed. In the minutes that followed, the line behind me grew exponentially, and I was thankful I arrived when I did. If I divided the line into thirds, I was in the first third, meaning I had a pretty good shot of pitching the first three agents on my list during the hour-long event.

On a side note, I’d heard these events can be a little intense, like pushing-and-shoving kind of intense. While I did hear a squabble or two about someone cutting in line, I saw no pushing or shoving, but I did meet some characters worthy of their own reality show.

While waiting in line, there was also plenty of writer-y bonding. Some of the authors I met were old pros at pitch slams and relayed what worked for them in the past (and what didn’t), while others confessed they hadn’t successfully edited their pitches to meet the specific time constraints. Some said the agents were a little more relaxed about the clock, while others said they strictly adhered to the three minutes we’d been promised. Basically, I heard conflicting accounts about everything and decided there was only one way I’d know for sure. By doing it.

Once three o’ clock finally arrived, we were herded in like sheep and immediately scattered our separate ways. After getting turned around a little (directions and maps so aren’t my thing), I spotted the first agent I wanted to meet, and there was only one women between me and her, YAY! After the woman’s three minutes passed by in what felt like 30 seconds, I was up, and I’ll confess that I never wanted to throw up more in my entire life.

I extended my hand, introduced myself and launched right into my pitch. About a sentence and a half in, the agent with the best poker face I’d ever seen, asked a question, then two, then three. I didn’t make it through what I’d rehearsed at all. We just started talking, and I felt myself relax. Well, a little anyway. And while I can’t recall much of what I said, something must’ve registered because Ms. Poker Face offered me her card and a few tips about the structure of my story. I was walking on Cloud 9 as I approached the second agent…until the nerves kicked in again.

I’d read that Agent #2 was a bit of a foodie, so I used that as the icebreaker before launching into my spiel. Since Italian cuisine plays a starring role in my book, pulling an audible felt right. And just like with Ms. Poker Face minutes before, I was two sentences in when the questions began. Turns out, chatting freely and off-script was so much easier and more effortless, and when the bell rang, Agent #2 invited me to send her 30 pages.

Feeling like I was sort of getting the hang of this, I made my way to Agent #3, who had also perfected the art of the poker face. I had no idea whether she liked me or my book, and I awkwardly filled the space with my novel’s merits and market potential until she interjected, “Can I be honest?”

“Of course,” I said, bracing for the worst.

“I don’t like your title. I don’t like the word ‘spaghetti’ it in. It seems a little downmarket.”

“Okay,” I said. “Thank you for saying that. I’m not all that attached to my title anyway.”

We talked a little longer and Ms. Poker Face #2 gave me her card and requested a manuscript. She emphasized the importance of really winning her over with my protagonist, and I was on my way.

I had time for exactly one more pitch, so I walked over to the fourth agent I had in mind. By this time, these agents have been through three-plus hours of Pitch Slam that particular Saturday, and I sensed she was a little tired. Adjusting my upbeatness accordingly, I launched right into my pitch. She let me finish the entire thing before asking a few questions about previous publication, who I saw the book appealing to, etc.

After I was convinced she wasn’t going to offer anything more than her best wishes, she handed me a card, smiled and asked for pages. I thanked her, shook her hand once more and realized that was it. I survived my first Pitch Slam without throwing up and had four new contacts and a slew of helpful pointers as I continue revising my novel that’s no longer known as Spaghetti in Exile.

Now that a little time has passed since Pitch Slam, I’m still in awe by how much you can gain as an author in only an hour—and not just the contacts. I loved how you could tell an agent just a little about your story, and she had immediately had a reaction. Not just whether or not it could sell or was interesting enough for a mass market, but specific guidance on how it could be even better than what you were describing in the first place. I came home from NYC not only excited to revisit my work in progress but thrilled to revamp it in ways I never expected to. As a result, I’m hopeful it can be that much better, and like always, I can’t wait for all of you to read it. :)