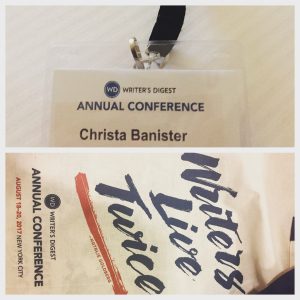 I’ve been writing professionally for nearly two decades, and there’s hardly anything about my career that would be described as “textbook.”

So come to think of it, it’s probably not all that crazy that I finally made my way to my first writers conference a whopping 10 years (!!!) after my first novel was published, right?

Just typing that last sentence feels a little weird, though. Having a 10-year-old debut novel sort of feels like finding out the kids you used to babysit are now in college—or even scarier, getting MARRIED. It doesn’t seem quite possible, and yet, here we are in 2017, a world that feels SO much different than 2007. It’s a good thing I haven’t gone back and revisited Around the World in 80 Dates recently because I distinctly remember there being a handful of MySpace references. Remember the ol’ Top 8 anyone?

But before I get too carried away with reminiscing, let’s get back to the conference, shall we? I’ve been a Writer’s Digest reader since I was a teenager, and the annual gathering in NYC was on my bucket list long before people were making bucket lists. I thought it would be incredibly cool to learn from the best in the business, mix and mingle with like-minded creative spirits, and if I was lucky, incredibly lucky, maybe someone would be interested in my novel.

And it turns out, I was right. It was all of that, minus a little of the starry-eyed naiveté. Going to the conference felt a little like the first day of school. I bought a new notebook, rustled up a couple of new pens and couldn’t wait to find out what I’d learn. Out of sheer habit, which showcases exactly how long I’ve been out of the classroom, I almost wrote my first and last name in the right hand corner once the speaker was introduced.

More than any class I’ve ever been a part of, college, high school or otherwise, there was a nervous, swirling energy as my new classmates filed in. Maybe it’s because the first session was a primer for the upcoming Pitch Slam (more on that in the next post), but whatever the reason, there was a feeling of excitement co-mingling with dread. This wasn’t just learning for learning’s sake, we were getting the skinny on how to wow potential agents from an actual industry insider. Cue the dun, dun, DUUUUUN.

Now as someone who didn’t use an agent for my first two novels, I was just as eager to learn the secrets as the young pups in the room. I’ve been sending query letter after query letter since late March and was excited to meet some living, breathing agents in person rather than trying to convince them of my novel’s merits by e-mail. And for a writer who happens to call DFW home these days, not exactly the likeliest of literary hubs, it was comforting being surrounded by people, young, old and somewhere in between, who shared the same goal.

Whether it was the speculative writer from Reno or the writing conference veteran from the Boston suburbs pitching a memoir, every person I met was so excited about what they were working on and couldn’t wait to hear about your project, too. The sense of community, especially during Pitch Slam, delivered some much-needed levity.

As expected, I learned so much about the craft of fiction (and pitching it) at the conference, but the best tips for how to approach agents are all nice and neat in one place here. And as promised, the next post will be dedicated to my first-ever Pitch Slam experience. I’m convinced that creators of reality TV shows are missing a major opportunity there because it was incredibly entertaining and full of colorful characters I won’t be forgetting any time soon.