38: The Year of Living Purposefully 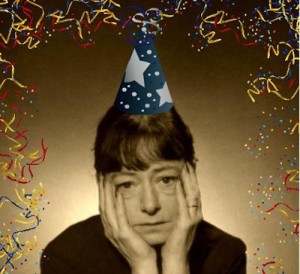 Ever since I turned 30, I’ve been dreading the birthday I just celebrated two days ago. It’s not the “big” one that’ll happen in (gasp!) two more years, but in my mind, my 38th birthday was always the scarier milestone.

In the hours leading up to January 2, I found myself feeling a lot like the girl on the left—a guest at a party I desperately didn’t want to attend. For me, 38 wasn’t just another year where I’d marvel at how quickly time has passed. It was the age my dad was when he passed away.

Strangely enough, I never thought much about death until my dad was taken from us much, much too soon. Unlike those who are preoccupied with death (famed film director Woody Allen, for example), I naively assumed that everyone I loved would enjoy a long, long life. Even when my dad was diagnosed with colon cancer, I remained an eternal optimist. He was young and healthy beforehand and had so much more life to live, so why wouldn’t he get better?

But he didn’t, and I couldn’t help thinking about all the things he’d missed. There were no more ferociously competitive games of one-on-one on 11th Street (even when he was sick, he never let up on me). He wasn’t in the audience when any of his kids graduated from high school or college. He missed weddings, the births of two gorgeous granddaughters and Christmas mornings when he’d tear open his presents with the excitement of a five-year-old. He missed countless opening days of fishing and hunting, his favorite pastimes, and two Super Bowl wins from his favorite football team, the Packers.

But most of all, he missed those everyday moments that make life so great, and I missed talking with him, too.

Not surprisingly, I’ve often spent so much time thinking about my dad that I forgot that my Mom’s 38th year wasn’t exactly peachy either. When she was my age, she was a widow with a teenage daughter and two kids in the single digits. She had to figure out how to grieve while remaining strong for us, and she handled a tough situation with a whole lot of grace. I’m not sure I could’ve done the same.

Now 23 years after my parents turned 38, the prospect of my own 38th year filled me with dread. But my sister Lindsey, younger by a whopping eight years, issued me a challenge that’s helped in reshaping my thinking. Rather than dwell on the number or what’s happened with our family in the past, she said, “I think you should honor Dad by making it your best year yet! Take advantage of each opportunity and moment, and I know without a doubt that great things are headed your way. I am so excited for you!”

So I plan on doing just that. In honor of my beloved father, Owen Farris, I’ve declared 2014 the “Year of Living Purposefully.” Naturally, I’m still figuring out what that looks like, but it began with celebrating my birthday with a smile on my face. And thanks to wonderful friends, family, my hubby, Will, who spoiled me rotten, and the bakers of Sprinkles Cupcakes, it was a fantastic start to what’s going to be a fantastic year.

Chances are, I’ll still be a bit in denial about actually being 38 since I don’t feel a day over 28, but I’ll try to wear my new age with as much dignity as I can. And probably a little glitter.